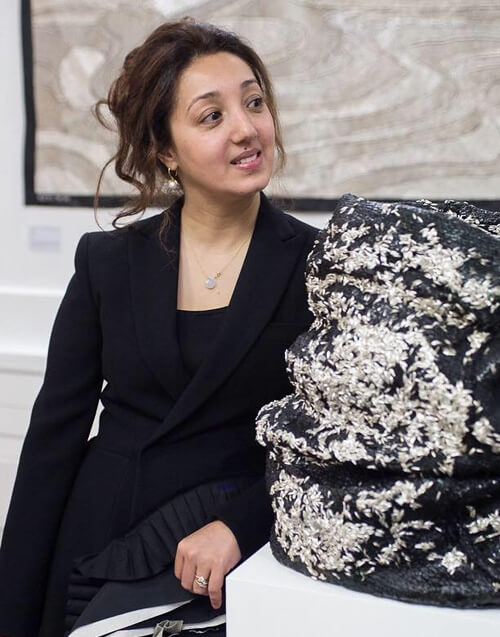 Revati Sharma Singh is an autodidact artist based in London who works with assemblages of ceramic, cast metal, hand made silver, tapestry, embroidery and paint. Her practice began as a portrait artist 20 years ago and has since moved to abstract painting and installation art. She casts grains in varied materials and stitches them together so that they form maps of countries, cutouts and drawings are placed over each other using rice paper forming various planes of visual decoupages. Revati Sharma Singh exhibits this series of works she has developed over the last six years in ceramic, metal and paint.

Central to Sharma Singh’s work, be it her abstract paintings or installations, is an exploration of the nature of human society, and the ways in which people interact with each other. This awareness came in part with the trips she would make as a child from her home in Mumbai to the family’s ancestral home in rural Himachal Pradesh, in north India. The stark difference between the bustling streets of Mumbai and the serene villages of the region had a strong effect on her, and a comparison between with the chaos of Indian cities and the house and its surrounding hills, soon became the topic of much of her earlier work featuring abstract landscapes.

A significant step in Revati’s development as an artist was realised during a spell in Singapore. Living outside of India for the first time, she would explore the city and its art galleries incessantly, becoming a particular admirer of the works of the Indonesian impressionist master Affandi, whom she cites as another important influence to much of her painting work. The success of her first ever show, held in the Raffles hotel in the city, was also, Revati recalls, the point at which she realised that she could use her art for good. She began donating a percentage of each of her paintings sold to charities based in Indian cities – something she continues to do, most notably with her contributions to the Magic Bus Foundation’s annual charity auctions.

But while her time away from India had inspired her to produce art, her return to her homeland would awaken in Revati a new, more political angle to her work, and today much of the artist’s work carries a strong social message. Her relocation to the fashionable Mumbai suburb of Bandra in 2007 allowed Revati to see the city again with fresh eyes, and to take what she cites as perhaps the most crucial step in her development of her art itself. She recalls seeing the view from their sea-facing apartment and being struck by the fact that it included both the glistening apartment blocks of the city’s rich and the sprawling slums lining the roads below. She determined then that her art should become her way of showing the issues that faced India’s crowded and challenged society, and a critique of her homeland soon became a central theme in her work.

This stance coincided with a shift in medium, as Revati turned to found objects and large-scale constructions for what would be her first installation work, titled How Long can you Stand it?, an immersive piece targeting the issue of sanitation in Mumbai. Balancing a serious critique on the issue with an playful approach to the taboo – audiences were challenged to walk around a maze constructed in part with colourful buckets from Indian lavatories – Revati sought not only to address the situation but improve it as well. By the close of the festival, she had gained sponsorship from a number of corporations to help fund the construction of modern toilet facilities in several of Mumbai’s largest slums.

Revati’s next large-scale installation represented another shift in ambition, this time with the politically charged Mera Desh Mahaan? Translating as ‘Is My Country Great?’, the piece was worked on by the artist daily, changing its form over a five-day public exhibition. In the work, Revati’s critique was widened from Mumbai to the whole of India, referencing historical battles for freedom and equality from the 1857 Uprising to the Indian Independence Movement. Modern Indians – deemed to have ‘inherited a free nation, not fought for it’ – were challenged to re-evaluate their views on the country, as the artist questioned the morality of an economic system that perpetuated the existence of super-rich and super-poor.

Further analysis on contemporary India came with Revati’s first solo show in India, with the exhibition Between the Lines representing a thought-provoking reconceptualisation on the ways in which communities are connected. Using strong colours and sharp, linear strokes across numerous connected frames, Revati explored the nature of what she describes as the ‘lines’ found in everyday life. These, she explains, can be the lines that connect us or those that divide us – from the physical lines that make up the grilles barring off city-dwellers’ windows to the unseen ones that separate those same residents by caste, creed or colour.

Fast establishing a name for herself internationally, Sharma Singh was invited to exhibit at the 2011 Art Monaco fair, which she did with Running on Faith, an installation featuring a life-size cycle rickshaw. In the work, Revati turned her focus more directly toward the religious context of modern India, targeting the concepts of faith and karma as manifested in an overweight, gold-coloured passenger being pulled along by a emaciated, grey-blue rickshaw driver – the latter’s thin body covered in tiny artworks of Hindu icons. The challenge here was against the passive acceptance of the status quo, often cemented through religious dogma, and the interweaving of caste and religion that shows itself so cruelly on Indian streets.

Revati’s styles and techniques have developed constantly, from her earliest works featuring landscapes, to the abstract and installation works of recent years. For the 2015 India Art Fair she produced a cross-over between her painting and installation work, with an arresting piece entitled Misconnections. Combining the bold colour and thick brush strokes typical of her impressionist style with modern, functional iconography in hash-tags and ‘at’ symbols, Revati explored the paradox of modern communication – asking how, in a world constantly connected, we can become so disconnected.

2015’s Italia Docet | Laboratorium marked Sharma Singh’s first appearance at the Venice Biennale, with two multimedia installations drawing on the work of renowned Indian philosophers Rabindranath Tagore, Sri Ramakrishna and Swami Vivekananda. The first, entitled 1915-2015 His Garden, One Hundred Years Later, is based around a 1915 poem by Tagore that addresses an unknown reader a century in the future, musing on the poem’s ability to transfer thoughts and emotions through time with words alone. This theme is taken up and brought into the 21st century by Sharma Singh, who, combining found objects with dried flowers, glass, nails and cloth, among others, looks ahead to the next hundred years of art.

The second installation exhibited at the biennale draws on the 19th century religious thinker Sri Ramakrishna, and his disciple Swami Vivekananda, and again seeks to transfer historical philosophies into the contemporary. This time it is Sri Ramakrishna’s critiquing on the dogma of religious traditions, in which followers of different faiths are taught to stand apart from each other, that forms the basis of the work. With a number of rich, 14-carat gold grains forming star-like patterns across a series of raised black blocks, at once apart yet conjoined, the piece reflects Revati’s modern call for religions and traditions to complement, not contradict, each other.